Safe Wednesday everyone ♫ For this week’s Hump day we have a line-up of talented gents that will entertain you with excellent music! Call your friends and join us at The Dirty Grind IAC 🙂
http://maps.secondlife.com/secondlife/Fender/109/145/56 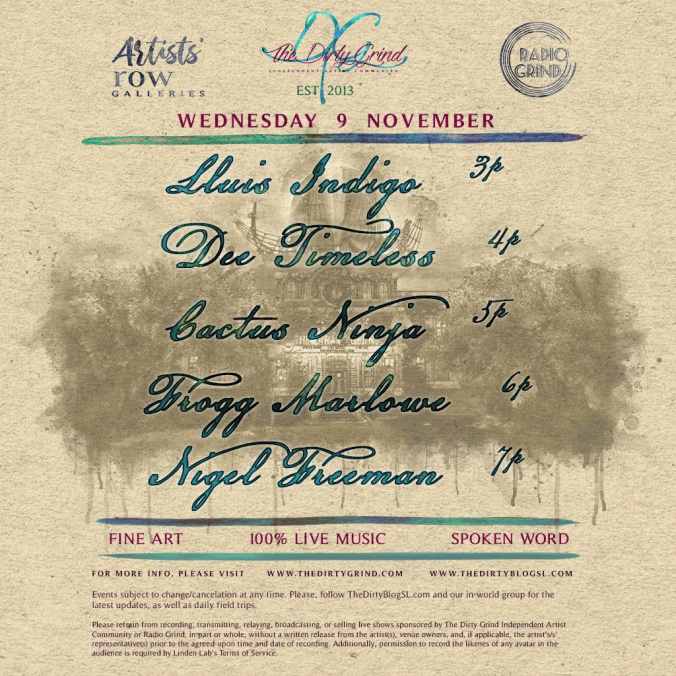 Lluis Garcia is a self taught musician who has been experimenting with music since he was 7 years old and performing since he was 14. Many know him as creator and builder in SL, but in 2017 he turned his creative focus to his real passion: music. Being from Barcelona, he loves to sing flamenco style called “rumba”, but also creates relaxing and deep sounds.

Dee’s guitar playing is second to none with vocals to match, providing a quality listening experience with a strong sound. He performs a broad range of covers, including fingerstyle guitar and singing in other languages, and likes to take listeners on a trip back to the past, and back again, without a seat belt. Aside from that it’s about fun! Dee LOVES to play music for people, and it is a great joy to reach a person’s soul, spirit, and mind through music.

Cactus Ninja started playing at 13, inheriting a good ear from his musical mother. He discovered guitar and bass, soon writing and recording original songs in many styles over several decades in RL. With an eclectic musical background, he has been a sideman, studio musician and bandleader. He’s worked with Natalie Cole, Todd Rungren, Talking Heads and recently The Drifters. He plays familiar songs plus his own in SL. Happy to meet all, he’s here to play FOR YOU!

Frogg Marlowe is a singer/songwriter performing original music with a selection of some of his favorite covers. He has an extensive arts background, with a history rich in theater and musical performances and 14 years of academic and professional vocal training. Frogg’s many travels through his long career as a musician have been a rich, inspirational road of songwriting and storytelling and he brings that experience and passion for music to share in SL.

Nigel is a guitarist and singer: he plays acoustic covers of popular songs ranging from the 60’s to the 2000’s. Nigel is a seasoned RL performer who traveled with a band for 5 years full time before settling down; since then he performs as an acoustic solo act, akin to his SL act. His style encompasses a range of artists from the Beatles or other classic rock on to REM, U2 and Pearl Jam and maybe even an occasional interpretation of something like Rihanna or Maroon 5. 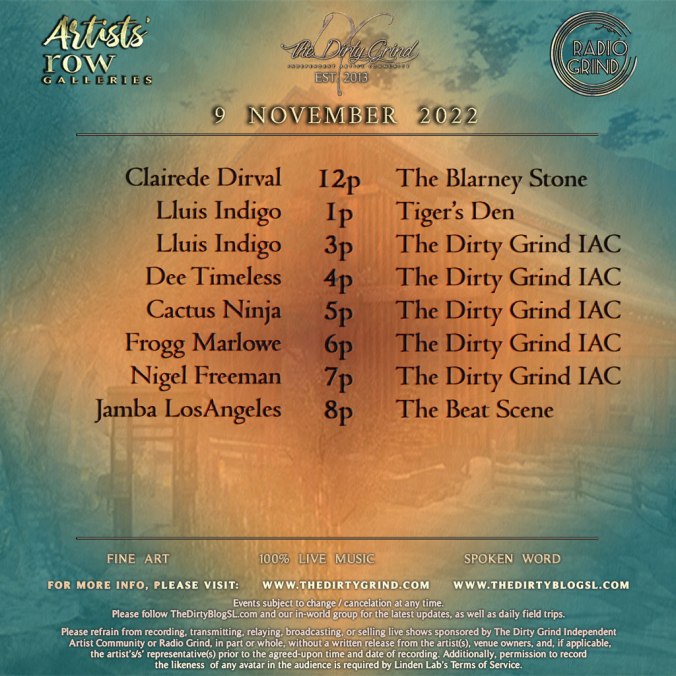 And as always you can hear all of these talented musicians 24/7 at Radio Grind! http://cp6.digistream.info:20354

Please support us by sharing! Thank you :)

This site uses Akismet to reduce spam. Learn how your comment data is processed.

Much love and thanks to our dedicated blogger & field trip coordinator, Elektra Panthar!

Celebrate the arts at the Dirty Grind Independent Artist Community ! Overlooking Jasmine’s Hollow, the grid's first and only Adirondack steampunk experience, the Dirty Grind is a haven for artists and lovers of creativity. Join them for the visual artist series and Radio Grind and over 30 hours of eclectic live recording artists spanning prog, roots, rock, folk, blues and jazz each month.

Suzy Snowflake is tapping on the window panes of The Dirty Grind Independent Artist Community. Hollow Days is in full swing with an entire sim of holiday magic, galleries, a book shoppe and listening and discovery booths for both SL and FL holiday shopping. There's hidden caves and hangouts, ice skating, and loads of photography opportunities for your enjoyment! Be sure to stop in on Wednesdays and Sundays for live music around the fireplace, as well as Poetry Open Mics on Saturdays at The Stoner's Lounge.

Out of the Looking Glass | Into the Madness

Take an adventure into Wonderland! Works from artists around the world are weaved into a journey through childhood's fear and magic, tinged with the warped macabre that comes with growth. This six-stage venue has returned with great expansion for its third year. Brought to you by The Dirty Grind Independent Artist Community and Radio Grind.

Showcasing the best of female talent. Filmmakers and Screenwriters

Being monsters isn't easy pretending to be human is even harder

A Stairway To Fashion

imagination is the key

and other short stories

The Musings of a Writer / Freelance Editor in Training

A ship maroons you on the shores of an infinite block world.

A Kat and A Mouse

A RFL of SL Event

A lifestyle blog about the virtual world of Second Life

I Remember This Movie...

Remember a scene from a movie, but not the title? Here's where you can get help, and help others recover forgotten movie memories.

I want to be rich. Rich in love, rich in health, rich in laughter, rich in adventure and rich in knowledge. You?